The Minister for European Funds, University and Culture, Miquel Company, has presented in Menorca the IstInternational Lyric Song Competition Joan Pons, a common project of the Balearic Ministry of Culture (DGC) and the Symphony Orchestra of the Balearic Islands Foundation (FOSIB), which is to be held on the 14th and 19th of June 2022, in Palma, and will give 42,500 Euros in five prizes.

The competition was presented at the Teatre Principal in Maó, with the attendance of Joan Pons himself: one of the most important lyrical voices in the history of opera and the Balearic Islands. Minister Company explained that the competition aims at «firmly supporting young generations, fostering an international career for the winners and promoting future participations for them in lyrical productions of international first order».

Company added that «we are designing and executing cultural politics aimed at trained and talented young artists, because we want to create opportunities for them with a public spirit of duty towards culture. In this occasion, we want to help young talents in lyric music», while he reminded that the Balearic Ministry of Culture and the OSIB recently made possible a concert led by composer and conductor Toni Vaquer, with young Balearic artists.

Pons thanked the initiative of the Government of the Balearic Islands in naming after him a new prize that helps motivate and make visible the work of young lyric talents: «I feel very honoured and thankful for the idea of the DGC and the FOSIB. I hope it will be helpful for new singers. Apart from the prize, the important thing is that candidates will be listened by one of the best juries in the world. I am very excited about this project and I would like to thank all the institutions».

Pere Malondra, Managing Director, highlighted that the FOSIB is covering for the accommodation expenses of all the selected candidates, during the in-person final stage of the competition, between the 14th and the 19thof June, in Palma. Besides, the competition will award five distinctions with the following cash prizes: €15,000 (First prize); €10,000 (Second prize); €7,500 (Third prize); €5,000 (Audience award); and €5,000 (Special award ‘Joan Pons’ for Best baritone, which will be donated by Pons himself).

In order to participate, contestants must pay a registration fee of 150 Euros; complete the registration form, which can be downloaded from the official website for the competition (www.juanponscompetition.com); and provide a scan of their ID card or passport, a recent portrait photography, a curriculum, a clear and readable copy of the receipt for the registration payment and a high resolution video containing two opera arias chosen by the candidate and a zarzuela aria (optional).

Only videos of live performances, of a high resolution and recent (within 2021) will be accepted. The arias must be different titles. Only recordings with piano or orchestra will be accepted. The video must include the two arias, except for candidates who decide to include a third zarzuela aria, as explained by the OSIB’s Principal Conductor, Pablo Mielgo.

A preselection jury, composed by some of the in-person jury members, is going to select between 30 and 40 candidates, who will take part in the final stage of the competition between the 14th and 19th of June 2022, in Palma. Candidates chosen for this stage become contestants, and they must prepare 4 arias from different operas. The final stage of the competition will function in the following manner:

— June 14th and 15th : quarter finals, during which every selected candidate (that is, every contestant) will be heard.

— June 16th and 17th : a maximum of 20 contestants will be selected for the semifinals. Both the quarterfinals and the semifinals take the form of a piano audition (the competition will provide the pianist at these stages).

The official and final rules of the competition, as well as the registration form, are going to be available from January 1st, through the website www.juanponscompetition.com. 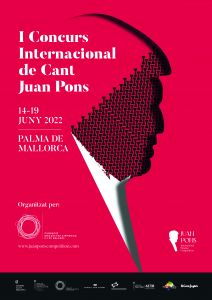 This website uses cookies to enhance your experience while browsing the website. Of these cookies, those classified as necessary are stored in your browser as they are essential for the operation of the basic functionalities of the website. We also use third party cookies that help us analyze and understand how you use this website. These cookies will be stored in your browser only with your consent. You also have the option to opt out of receiving these cookies. However, excluding some of these cookies may have an effect on your browsing experience.
Necessary Always Enabled
The necessary cookies are absolutely essential for the website to function properly. This category only includes cookies that ensure the basic functionality and security features of the website. These cookies do not store any personal information.
Non-necessary
Any cookies that are not particularly necessary for the operation of the website and that are specifically used to collect personal data from the user through analysis, advertising, other embedded content are called non-required cookies. It is mandatory to obtain the user's consent before executing these cookies on your website.
SAVE & ACCEPT
X