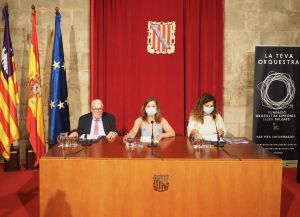 ARMENGOL ATTENDS THE SIGNATURE OF A COLLABORATION AGREEMENT BETWEEN PILAR COSTA, ON BEHALF OF CONSELLERIA DE PRESIDÈNCIA, CULTURA I IGUALTAT, AND KLAUS-MICHAEL KÜHNE, PRESIDENT OF THE KÜHNE FOUNDATION

Costa applauded the agreement, because it means “a step forward towards the achievement of an emblematic project that is a priority for the Balearic government”. She also thanked the Kühne Foundation for their involvement, because “it will make Caixa de Música a reality, after a long time waiting for the construction of the strategical project”. In this sense, Costa highlighted the fact that the OSIB has celebrated their 30th anniversary and, “after awarding the orchestra the CAIB’s Gold Medal”, she said, “commemorations will now come to a full circle” with the construction of their future headquarters.

Mr. Kühne, on the other hand, explained that their participation in the agreement aims at taking the OSIB concerts to a wider audience and enhancing the cultural life on the Island, among others.

The building “Caixa de Música” will be located on Brotad Street in Palma, in a plot of land transferred by the Ajuntament. It will be made up of three different units: a central building hosting the orchestra performances; a lateral building for the musicians’ rehearsals and study hours, as well as a backstage area; and a third building for offices and archives.

The construction of the “Caixa de Música” means that the OSIB will finally own a stable place of business, adequate to their daily activity, from both an artistic and administrative focus. To the FOSIB, the fact of not having their own headquarters currently meant a yearly expenditure of about 400,000 Euros, in rent and insurances.

The agreement implies an increase in the public-private cooperation for the construction of this cultural equipment. The “Caixa de Música” has a budget of 10.5 million Euros, of which 4 million come from private funding: 2 million are achieved through Fundatur, and 2 million through this agreement.

The Government contributes with 6 million collected through the Sustainable Tourism Tax (ITS): 1 million comes from the 2016 collection, and 5 million from 2019. These 6 million are co-financed at 50 per cent through FEDER European funds; therefore, the actual investment made by the Government will be cut to half, resulting in a global sum of 3 million. On the other hand, it is worth remembering that the sum to receive from the ITS in 2019 was calculated to amount to 7 million Euros, but the figure has been reduced so that 2 million can cover for the expenditure incurred due to the Coronavirus pandemic. The remaining 608,738 Euros come from the FOSIB’s budget for 2020.

The Kühne Foundation was created in 1976 to support educational, training, research and scientific projects, in the field of transportation and logistics, as well as medicine and culture. They collaborate with concert halls, music festivals such as the Salzburg and Lucerne Festival, and musical ensembles, like the Hamburg Philharmonic.

This website uses cookies to enhance your experience while browsing the website. Of these cookies, those classified as necessary are stored in your browser as they are essential for the operation of the basic functionalities of the website. We also use third party cookies that help us analyze and understand how you use this website. These cookies will be stored in your browser only with your consent. You also have the option to opt out of receiving these cookies. However, excluding some of these cookies may have an effect on your browsing experience.
Necessary Always Enabled
The necessary cookies are absolutely essential for the website to function properly. This category only includes cookies that ensure the basic functionality and security features of the website. These cookies do not store any personal information.
Non-necessary
Any cookies that are not particularly necessary for the operation of the website and that are specifically used to collect personal data from the user through analysis, advertising, other embedded content are called non-required cookies. It is mandatory to obtain the user's consent before executing these cookies on your website.
SAVE & ACCEPT
X